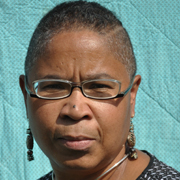 Peggy Piesche is a Literary and Cultural Studies scholar whose work focuses on Black European Studies. Born and raised in the GDR, Piesche studied in East and West Germany and Russia. She taught at the University at Utrecht/ Netherlands and held visiting positions for German, Women’s and Africana Studies at Vassar College and Hamilton College/NY, USA. Her current research project ‘Concepts of Future in African/ Diasporic MediaScapes’, embedded in the Academy for Advanced African Studies at  Bayreuth University, is exploring how Diaspora is re/negotiated through notions of race and digitalized collective identities. She has published about racialized gazes, colonial history and collective memories, and received research grants from the Volkswagen Foundation and Alexander-von-Humboldt-Foundation for a new interdisciplinary research project “Black Europe: History of a Forgotten Continent”, a ground breaking new academic structure that was implementing Black European Studies in Transnational Perspective into a German and European academic curriculum.

Piesche’s areas of research include Critical Race and Whiteness Studies, Black Feminist Studies, Diaspora and Translocality, and the Performativity of Memory cultures (Spatiality and Coloniality of Memories). Articles on these subjects appeared in several journals and edited volumes. She is also an activist and board member of both ADEFRA (Black Women in Germany) and ASWAD (Association of the Worldwide Study of the African Diaspora) and an activist-scholar in and to the Black community in Germany.